Play, exchange and challenge other players from around the world 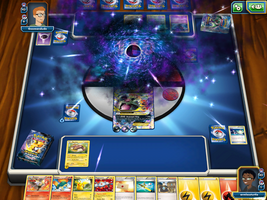 Advertisement
Pokemon Trading Card Game Online is just as the name suggests: an online version of the amazing collective card game Pokemon. As such, you can challenge other players from anywhere in the world to a card duel where only the best Pokemon trainer will be victorious.

Gameplay in Pokemon Trading Card Game Online is practically identical to the collectible card game. Luckily, if you don’t know the rules, you just have to play the tutorial. It’ll teach you all the basic concepts you need to start playing and winning.

In Pokemon Trading Card Game Online you’ll find hundreds of different cards, each one of them with their own attributes and special skills. Also, using a lot of cards will unchain a beautiful 3D animation which will then lead to absolutely spectacular combats.

Pokemon Trading Card Game Online is a super entertaining collectible card game that fans of the Pokemon saga will specially love.
Reviewed by Andrés López Translated by Beatriz Escalante
These are all the official Pokemon games for Android

Until recently it was impossible to imagine that we'd have half a dozen official Pokemon games for Android. Though some – like Pokemon GO – are ridiculously famous, several of the others remain unknown even to serious Pokemon fans. So without further ado, here they all are.
See more

Tongits Go
Play fast and fun games of Tongits
Teen Patti - Indian Poker
Face your opponents in this Indian poker game
Zynga Poker
The most popular poker game now in your pocket
UNO!™
Classic UNO™ fun for your Android!
Legendary Royale
One of the best Clash Royale private servers
Magic: The Gathering Arena
The full 'Magic: The Gathering' experience, now on Android
Tongits ZingPlay
Play a game of Tongits against players from all over the world
Marvel Duel
A head-to-head dueling TCG set in the Marvel Universe
Advertisement